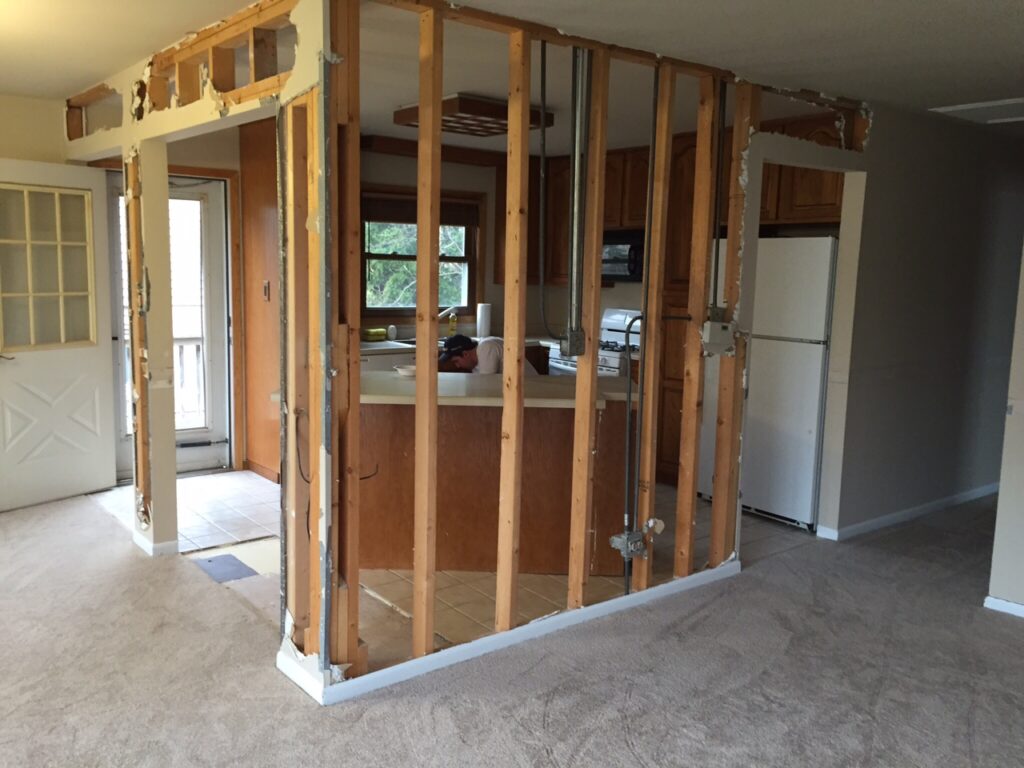 Demolition: Removing Walls
Follow these guidelines for a safe takedown.

Getting walls down safely and effectively rates a fair 2 to 2.5 on my Cuss-O-Meter scale, which ranges from 1 to 5, with 5 the toughest. You need to move carefully and have a plan. Follow the steps below, and start by heeding the Live Load Caveat.

Step 1 in removing a wall is to determine if it’s load-bearing. A good rule of thumb is that if the wall is toward the middle of the house and running perpendicular to the joists above, it’s carrying weight—and lots of it.

Load-bearing walls rate a solid 5 on the Cuss-O-Meter because of the extra effort involved. Posts and headers (there are several variations that are beyond the scope of this article) must be installed to replace the wall. This isn’t super advanced carpentry, but there are lots of details and heavy lifting that have to be approached properly or you’re basically guaranteed problems.

When I remove load-bearing walls, I frame temporary support walls on either side of the wall I’m removing, adding a diagonal strut to beef them up. The “temp walls” carry the load while I remove the original wall and replace it with king studs, jack studs and a properly sized header.

I recommend pulling a permit for this project. First, you’re supposed to, and second, when you submit the drawings detailing your framing, the inspector has a chance to double-check you. It may turn out that the floor system below may need more beef or blocking, or the header may need to be engineered lumber instead of solid sawn to achieve your desired span, or you may need more king studs than you’d planned on.

Non-load-bearing walls’ main function is to house mechanicals and serve as a substrate for hanging drywall that divides the rooms. If you want that division outta there, the key is to pick them apart smart.
Cover the floor below the wall to be demoed (both sides) with a big piece of cardboard or 1/4-inch plywood to protect the finish. Drop-cloth the rest of the room if you’re worried about dust.

Determine if you have to deal with electrical lines, plumbing or HVAC. Opening up a wall you’ve planned to move only to find a big honkin’ HVAC chase in there will ruin your day.

The goal isn’t wholesale devastation. It’s to leave a substrate that’s as easy as possible to build from. Here’s a page from my demo playbook:

Drywall/plaster. Remove drywall or plaster to expose the studs. If only part of the wall is coming out, say for a door, cut the left- and right-side plumb lines. Punch a hole in the center of the wall and then wiggle the drywall back and forth; it’s more likely to come off in large pieces than in small chunks. If you’re saving the ceiling, score it where it meets the wall using a utility knife; cutting the tape minimizes damage as you separate the pieces.

Plaster comes off in what a guy I knew called “kibbles and bits.” Huge clouds of fine dust happen here, too. I haul plaster in 6-mil contractor trash bags. It doesn’t take much plaster in a bag to make it very heavy.

Studs. When possible, use a reciprocating saw with a demolition blade to cut nails between the bottom plate and the stud bottom. This frees the stud, which you can pry free from the nails above. If you don’t have room to wrangle an 8-foot stud, cut the stud in the middle and then pry out each half.

Plates. Remove the top and bottom plates. Use a recip saw with a demo blade. Usually, you can break the seal between the wood and the nail by prying. Sometimes it’s necessary to cut the nails.
Tips

Here are some general pointers to help make the job easier—and safer.

When moving materials through the house, be very careful.

Watch out for nails, both sticking out of plaster lath and stuck in studs and plates.

A dust mask is a nice barrier between demo dust and your respiratory system. A long-sleeve shirt and pants are also nice for your skin.

If you find wire lath under your plaster, be extra-careful. This stuff makes a scalpel look like a Twinkie.